The call for the Doede

By The Dudely Lama

If there’s one thing about Dudeism that we should be most proud of, it’s that it’s truly universal – having existed throughout recorded history and in all places. Let’s not forget, it might not be just just ah, ah, an early 90s thing in Los Angeles, you know? The man for his time and place, well, he was the man for all times and all places. Fits right in there. And that’s the Dudeist. In Los Everywhere.

Sometimes it’s easy to forget that our problems and aspirations are pretty much the same as all humans everywhere and always. But as long as there will be human paraquat and real reactionaries rolling out unchecked aggression, a call for Dudes will ring out through the land. Phone’s ringin’, Dude.

Which is why it’s especially nice to hear from true Dudeist philosophers from all parts of the globe. worldward the wagons. Of course, we’ve got our Swedish Jeff, John Jansson, and the Italian Dudeship Andrea Favro, and we just recently appointed the Dudeship of the British Virgin Islands, Scott Ferris, to name a few.

But we’ve only just heard from a feller named Hidde Boersma, who not only was featured on Frisian TV (Friesland is a tiny northern province of the Netherlands) talking about The Church of the Latter-Day Dude and his own independent creation of "Doedeisme." Turns out that Hidde gets paid by the Dutch government to write (Holland is cool like that) and has recently published a book of poetry and short stories. Here’s the TV program he was on (Dudeism is about two minutes in):

We asked Hidde some questions about himself, as well as Dudeism and Doedeisme.

Here are his replies:

Can you give us a little backgroud about yourself and your poetry?

I was born in 1980 in a Frisian village called Wieuwerd, with only a 250 inhabitants. The first time I published my poems in a literature-periodical, was in 2000. I debuted with a book of my poetry in 2008, De rop om Doede("The Call for the Doede"). This year I will debute with a kind of novel, With Full Sails into the Mist. I’m already busy with the next.

I’ve studied for eight to ten years towards a diploma in Humanistics (a unique university program, based on humanistic values, investigating the human being in all of it’s glories and shortcomings). The last to years I worked as a mailman in the centre of the city of Utrecht. Now the goverment pays me to be a writer.

What is the relationship between Doedes and Dudes?

Although Doede is a Frisian proper name, in the poem I use it symbolically. It is a fusion of the Dude and a Frisian owner of a fishstore in Stavoren, Doede Bleeker, who is also a singer songwriter. A pretty dudely kind of man. So in the poem I used Doede, though I could have used "Dude" as well, but probably the use of a proper name was more poetic and mysterious. However, my poem is partly a child of The Big Lebowski.

The Doede can be seen as the tao as well, as the way to follow. It is calling you to walk it your own way: a call for the Doede in yourself.

You can see this as a appeal to people to take live as it is; complex but there not to be taken all too serious. Doede can be the aim to live one’s own life, to follow the dude inside yourself, do not hide, do not please others, but just be.

Take it easy, if you feel like that. Go, if you don’t. Do as you please. To me Walter Sobchak is in some ways a Doede too.

What is your relationship to Dudeist philosophy?

I think it was back in the year 1999 or 2000 that I saw The Big Lebowski for the first time. Since that time I have often said that TBL is like the Bible to me.

I sometimes contemplate myself using the easychair-handle to comfort my sitting position, saying: ‘I’m unemployed.’ That comforts my state of mind a lot. A friend of mine has a chair like that, when I’m around I always sit on it, taking it easy.

The Dutch government pays me to be a writer. For me this is a phenomenal escape of being employed. Writing is a passion for me, but it’s just a way of spending time in a nice way, and not more important then hang out with my friends, doing a little this or that.

To be honest, my style of dudeism is a kind of yin yang movement between the Dude and Walter Sobchak. I can have a temper, that’s also a reason I find inspiration in the Dude. He’s of help. On my birthday in 2007 a friend of mine gave me a self-printed t-shirt with Walter Sobchak waving the gun at Smokey, with the word underneath: Mark it zero.

(Ever thought about the dialectics of Dudeism?

Maybe it seems more like dualism, but the Dude copes with it dialectically. But man this a far out train of thought. I’ll stop here, before I lose it.)

In the TV program I explain about an article in the Dutch newspaper de Volkskrant where-in a guy, named John Schoorl, wrote about the poem The Call for Doede (De rop om Doede). He recognized something in it and called me the father (patriarch) and inventor of Doedeisme.

”There is now way of return, in the new Spring. We agree. We will become a Doede, so we can tell the others that they have to become a Doede too,” he wrote.

That was in February 2007, and about three years later I got curious to what happened to this new stream called Doedeisme. There´s a girl who writes plays who said in an interview that she wanted to put effort in spreading Doedeisme, but this was also back in 2007. During a 2010 session on Google, the machine asked me if I meant Dudeism. Well, that was a kind of inspired thinking of the Google machinery! That’s how I came into contact with Dudeism.

Can you tell us what the angle of the TV program is? Very few of our readers understand Frisian, unfortunately.

The portrait of me as a poet was an item in a cultural program on Frisian television (Omrop Fryslân) called K-rûte.

The reason they made a portrait of a poet was because it was Dutch National Poetry Day. The maker of the item, Annet Huisman, choose to portrait me. She came to my house that day, followed me in the train to a city in Fryslân, Joure, where I had to perform some of my poetry among some other poets.

The focus of the program came to my poem The call for the Doede, in the first because of it’s relative fame journalists always want to hear about it, and at the time also because of my enthusiasm about the existence Dudeism as a kind of brother of Doedeisme. I thought it was time to launch Doedeisme in my own spirit, and in the spirit of Dudeism as well, before some third dog walks away with it! As being called father and inventor of it I want to lay a kind of fundament for the Doedeisme myself.

Annet Huisman happened to be a ‘dudeist’ herself, so she loved it, and completely unexpected to me she added parts of The Big Lebowski into the item. Very funny, and nice too.

Further I tell about a lock-area (sluices) where freebootery people like to have a joint or a beer, or just go fishing, near to my home. On the way to it we go to snackbar Marco Polo, run by the man with the umbrella you see in the film, to buy a bottle of beer. I tell that one time I was feeling a little sad. A pariah kind of man who sit’s at the locks everyday saw the expression on my face and said he wanted to pay for my beer. Brotherhood.

Last summer the government, pushed by narrow-minded people, placed signs with Verboden Toegang(Prohibitory signs) on the lamp-posts on the locks. I explain how I went there with a metal saw, but I just couldn’t reach it. (While writing this I realize I should have tried to climb up the lamp post, but at the time I didn’t even cross my mind). I considered taking a ladder with me, but maybe this was probably something for during the summer, not for during the winter: nowbody wants to sit there at this time of year anyway.

So, that was a kind of dudeist-politics: the lock tied the neigbourhood together, but the government did some territorial pissing on it.

What are they saying about you as a poet (and writer)?

The narrator starts to say that I debuted in 2008 with the poetry book The Call for Doede. Like I said, in the program the focus is completely to that one poem of mine, The Call for the Doede. Also my father comes in the picture, the man who walks into the bookstore. The tiny books you see, are periodicals about and with Frisian litarature. My father has started them 35 years ago. He’s a writer too, but also two sisters of my mother are writers. I also explain I was already into stories as a kid, I even started working on a book when i was somewhat ten years old, called Bar/Pub the Blather.

Further on it is about my upcoming book, a kind of novel existing out of related short (autobiographical, non-fiction) stories, with the title With Full Sails into the Mist, and also about another novel I am working on. That will be about the most regular guy in the most regular village in Fryslân. It has to be a kind of comic, with a kind of philosophical undertone. 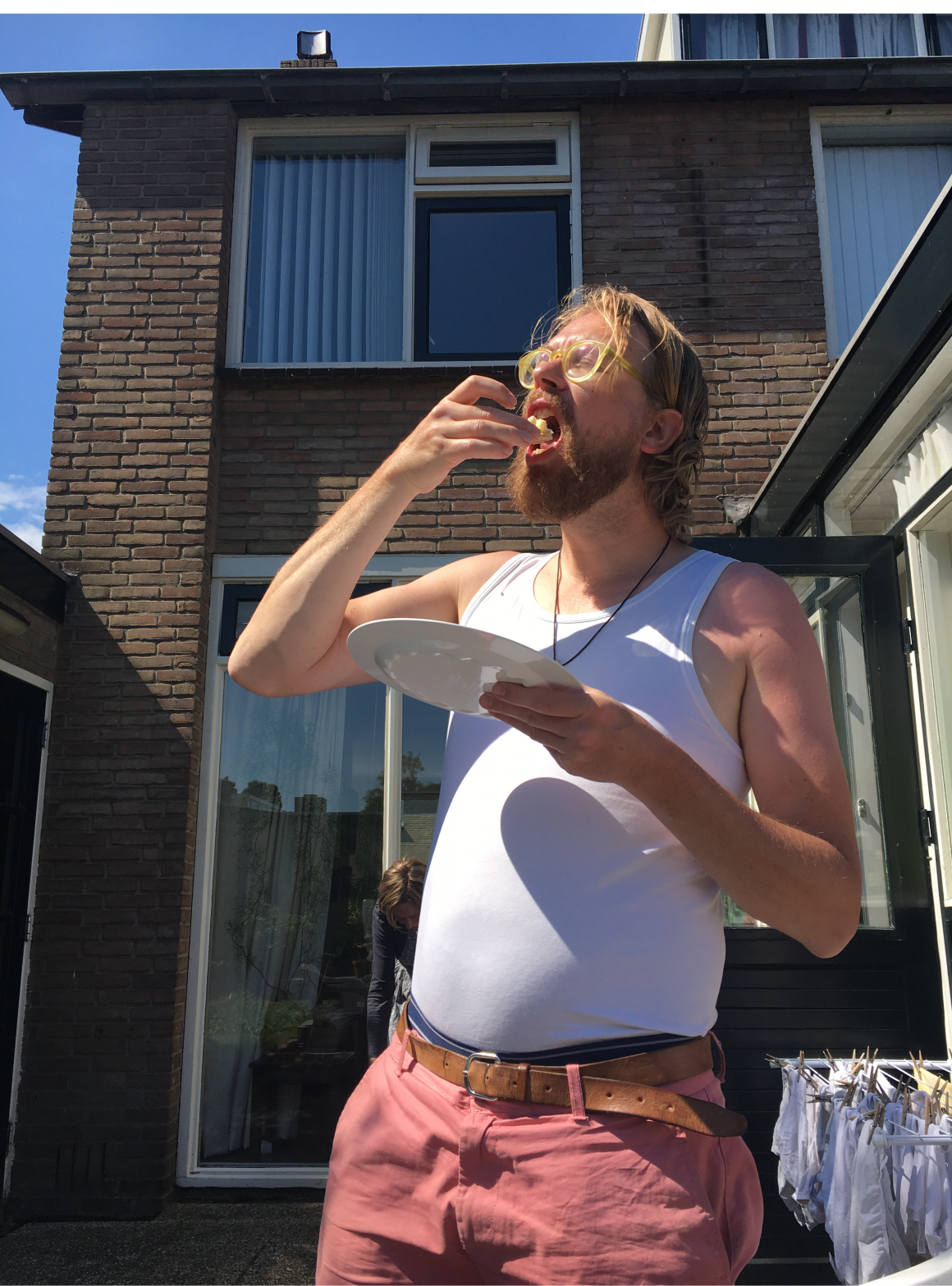